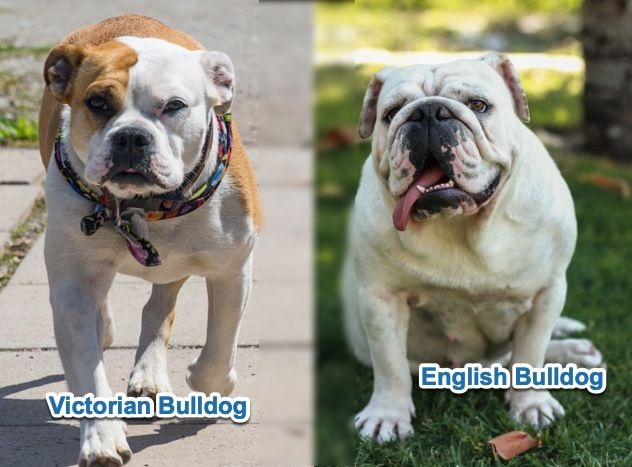 So, how does the Victorian bulldog compare to the English bulldog?

Victorian bulldog vs English bulldog – what are the differences

The Victorian bulldogs weigh 55 – 75 pounds can grow up to 9 inches long and have a lifespan of 12 – 14 years. On the other hand, English bulldogs can weigh 50 – 54 pounds depending on several factors and stand about 16 inches tall. They have a lifespan of 10 – 12 years.

One of the most notable differences between the Victorian bulldog and English bulldog is the appearance.

Victorian bulldogs are muscular and athletic. They have stout limbs, a broad muzzle, button ears, wide nostrils and a loose hanging skin. Their eyes are set wide apart and low. The stocky look is completed by a set of characters including straight, muscular forelegs, broad shoulders and a wide chest. They come in many colors including solid white, solid red, fawn and all brindles.

The English bulldog on the other hand has a large, spherical head with a shortened muzzle that gives a flattened appearance. Their eyes are wide and set low, the nose is black and upturned slightly and they have a broad and massive undershot. Their upper jaw is behind the lower jaw and this slightly eposes their incisors and gives English bulldogs a comical grin. They also have thin ears, short necks and large, muscular, broad shoulders with a deep, full chest.

The English bulldog is a an extrovert, sociable and affectionate making it great for companion. English bulldogs have a desire to have close contact with people and attention making it a perfect family dog.

However, English bulldogs don’t live well with other family pets and they may be quarrelsome with strange dogs. They are stubborn and have a strong sense of domination and determination.

English bulldog puppies are very lively and energetic. However, they get less active and energetic as they grow older.

The Victorian bulldog is known for its loyalty and trustworthiness. They are very friendly; enjoy people’s Company and attention.

If you have a family, you will be happy to hear that Victorian bulldogs love kids and get along with other pets pretty well. While their appearance might be intimidating, they are dependable, docile, and affectionate dogs.

English bulldogs are an intelligent breed however; they are slightly stubborn when it comes to training. You will need a tactful trainer to help you handle your Victorian bulldog. Since English bulldogs are prone to separation anxiety, it is more ideal to crate train them when they are puppies to reduce them. They also need socialization training to help the know good from bad.

Training is not all easy when it comes to the English bulldog. This is because they can be very dominant over other dog breeds. For this reason, socialization and obedience training should be imparted when the English bulldog is a pup. Assertiveness by the instructor is required during training to prevent any dominance.

Exercise – The Victorian bulldogs also require a moderate amount of physical exercise daily to keep fit. Unlike English bulldogs, they are not very active which is why they require more regular exercise to keep fit.

Grooming – As an indoor dog, the Victorian bulldog is an average shedder and has short hair. They require brushing once or twice a week with a firm bristle brush.

Exercise – English bulldogs puppies are playful and enjoy exercising. However, when they get older they are not too interested in activity. Regardless of this, exercise on a regular basis is needed to keep the English bulldog healthy.

Grooming – Just like the Victorian bulldog. The French bulldog has a short, smooth coat. It requires brushing at least thrice every week.

While they have similar traits, the Victorian bulldog requires much more maintenance when compared to the English bulldog. They need more exercise, are stubborn when it comes to training and are prone to separation anxiety. Nevertheless, these two are fine dog breeds that would make a perfect addition to any family.

How do I know what type of bulldog I have?

Most, if not all, bulldogs are known for their flat noses, wrinkled faces and stocky bodies. If you are not an expert, it can be difficult to tell what kind of bulldog a dog is at first glance. Prominent features like the head, mouth, ears, coat, body shape, and tail length can help differentiate between two different bulldog breeds.

Can I live with an English bulldog in my apartment?

Yes. English bulldogs do not necessarily need a yard, they make really good apartment pets. They are low endurance which means they require moderate exercise and thrive best in cooler climates.